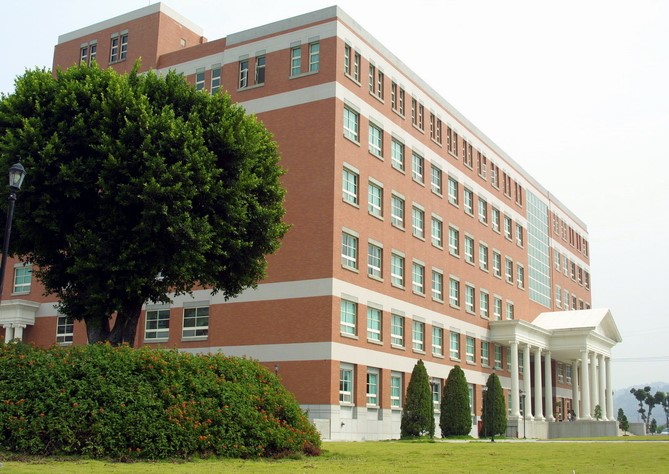 The Management and Humanities Building is the first building of Asia University. The entrances of the building are very elegant, each mainly with the classical baroque structure of huge Ionic-order columns. 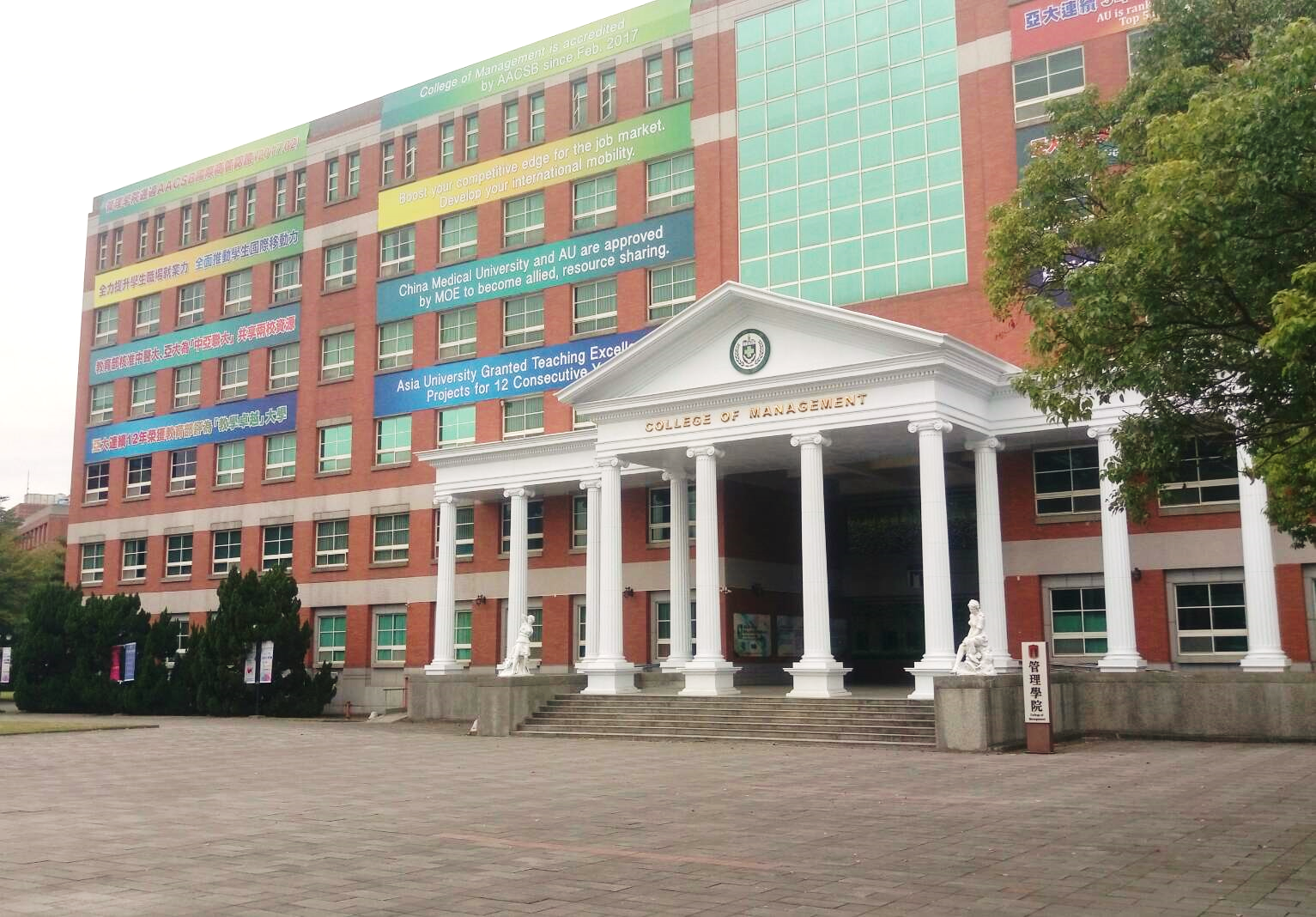 The main entrance of the building, regarded as the door of the College of Management, faces the south. With the structure of a triangular-shaped gable, the entrance consists mainly of a high top, a horizontal beam, and many pillars. There is a scenic garden in front of the building, which includes a large square space paved with grey bricks and a square grass yard 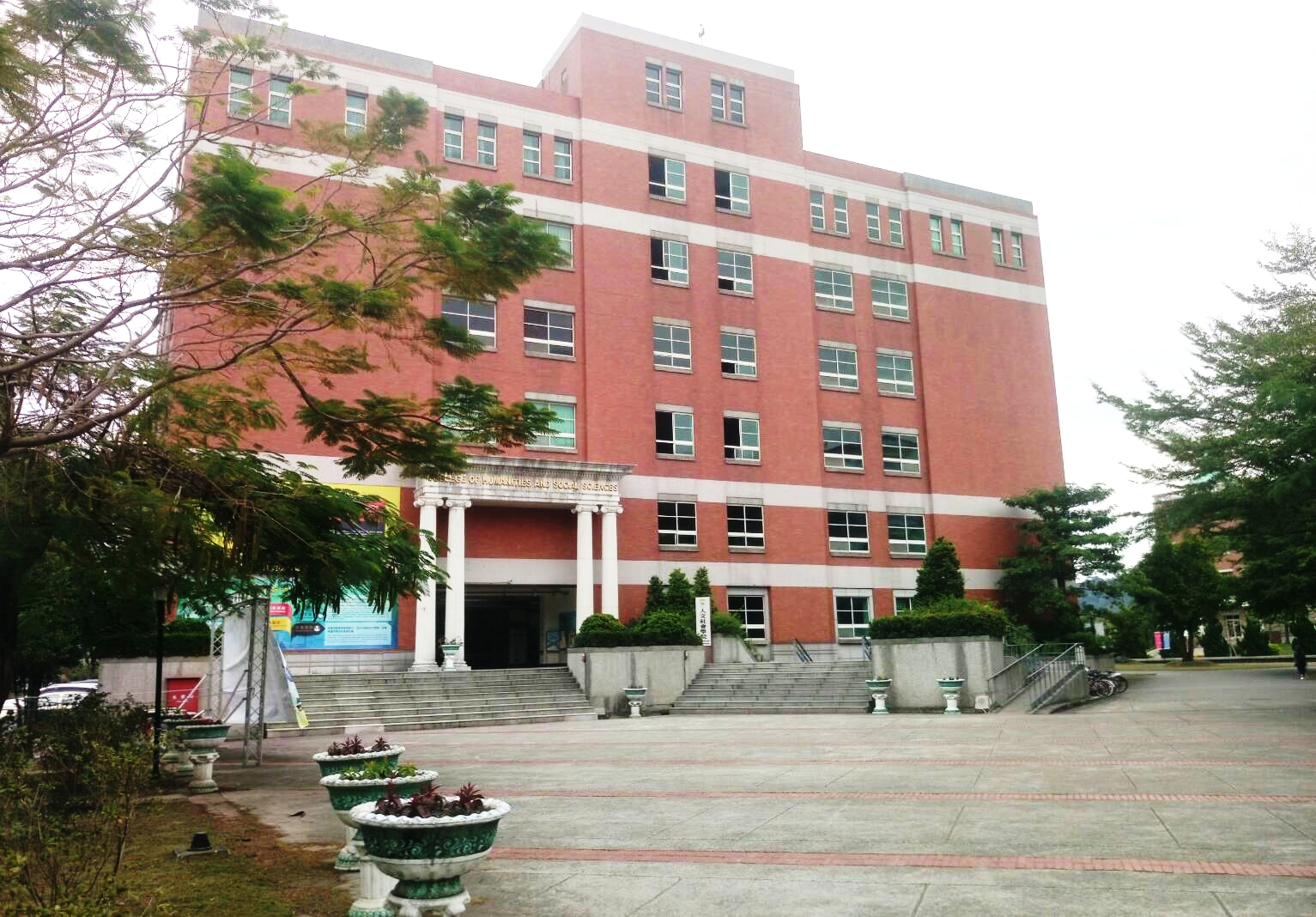 The west entrance of the building is regarded as the door of the College of Humanities and Social Science, which is constructed with four columns supporting a horizontal beam, forming a baroque-style structure as well. Before the entrance is a platform, followed by a square with geometric-shaped plants. The square is used as the pathway from the first and the second dormitories. Many campus activities are held in the square.

The north side of the building has a "virtual entrance" with a structure of six pillars of the Ionic order supporting a horizontal beam.

Surprisingly pretty are four bushes of hedge bamboo in the middle courtyard of the building, which is a recreational area for students. There are flower beds aside the corridors on each floor of the building. Embedded in the flower beds on the first floor are coral plants with cute red flowers, on the second and third floors are common lantana plants, on the fourth floor are common allamanda plants, on the fifth floor are primrose jasmine flowers, and finally on the sixth floor are wedelia plants. The plants fall down from the beds and wave in the air, forming a dynamic flower scene which contrasts with the white walls of the corridors. 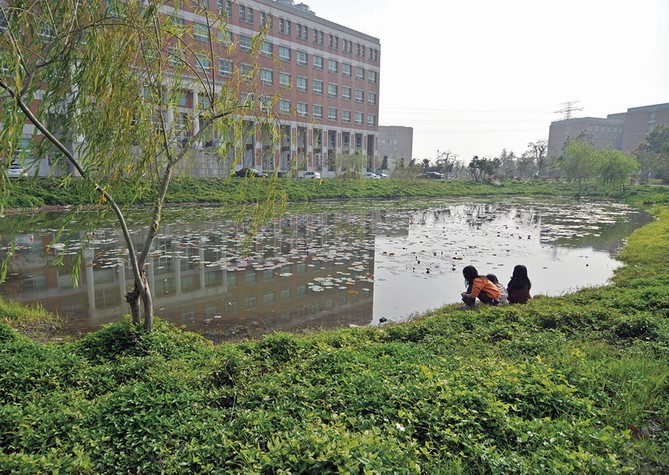 At the back of this building, there exists a lotus pond which, like a mirror, reflects a pretty image of the building. A pavilion appears at a corner of the pond, lotus flowers float on the pond water, and willow trees make shades around. Students come to have rests in the pavilion, read books there, and appreciate the floral scene outside. What a happy campus life! 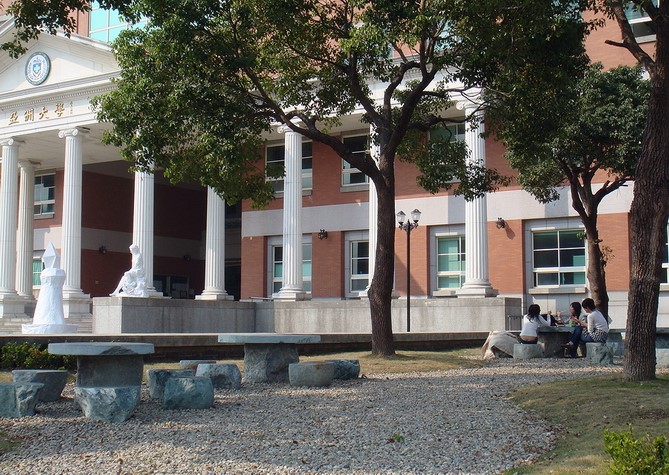 At the left-hand side of the front door of the building are several camphor trees, and under them are a number of stone tables. The nearby area is paved with white pebble stones and surrounded with beautiful flowers, where students may meet after class and talks, creating a good time in the university career. 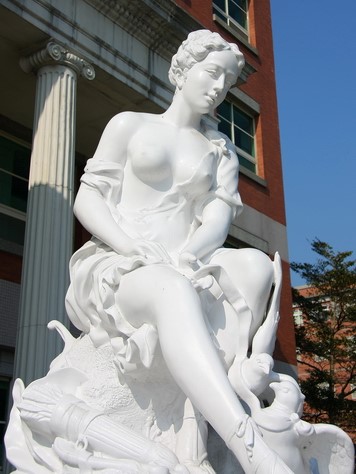 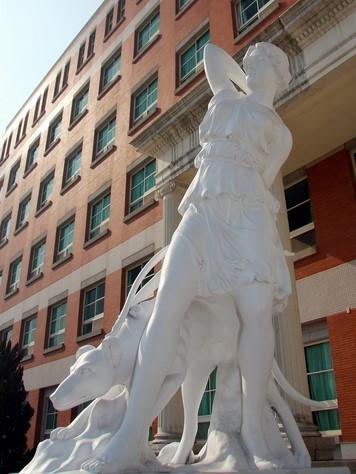 Finally, it is mentioned that at the front door sides of the building, there stand two finely-carved statues of figures from Greek mythology with alive looks and graceful postures, just like two guards of the building which are worth close observation and appreciation. 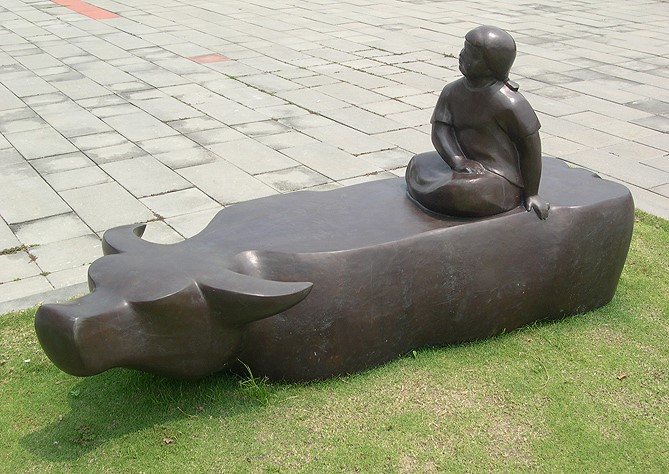 Enjoyment with a Bull

This work "Enjoyment with a Bull" is kind of down-to-earth and arouses people's memory of countryside life. The little girl rests on the bull back leisurely, showing an intimate affection between the human and the animal as well as the carefree feeling in the rural environment. The observer of the artwork may imagine to sit on the bull back with the girl to live a life in a past village. While cherishing the memory of old times in this way, people hopefully will appreciate more the rich life of today. 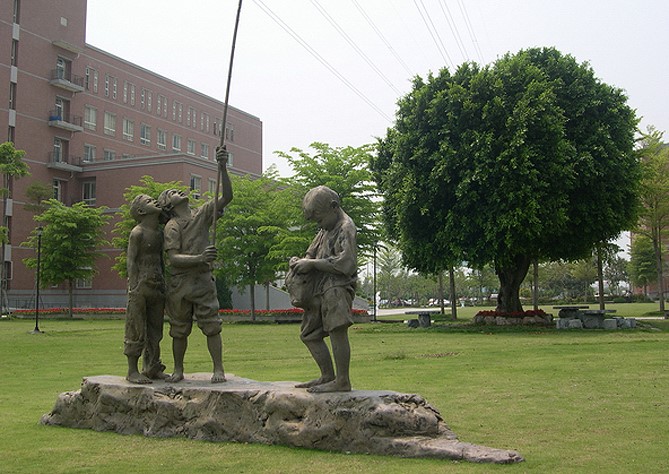 In the Isle of Happiness

The work seems like playing a symphony of countryside life, showing the meaning that in the multitude of counselors, there is wisdom. The creator of the work, Prof. Shang-Ping Chen, tried to cherish the memory of boyhood and depict the relation between humans and nature. Besides, Prof. Chen sedulously sculpted the land under the three boys into the shape of the Taiwan Island and name his work as "in the Isle of happiness," aiming to show the rich spiritual life in Taiwan. 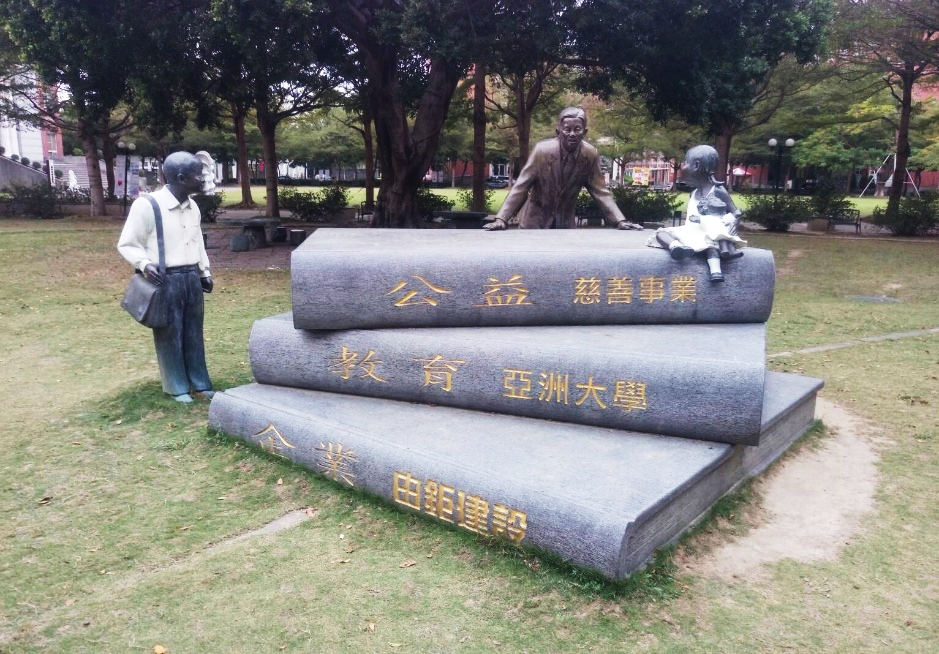 This sculpture symbolizing the characteristics "plainness, braveness, sincerity, and charity" of the past AU Founder Mr. Tseng-Lien Lin is a work of Master Ten- Chuan Yu, made of bronze with three giant books representing respectively "Enterprise --- Yo Ji Construction, Co.," "Education --- Asia University," and "Welfare --- beneficence." In the sculpture, Mr. Lin put his hands on the books, symbolizing his goals and image of working hard for enterprise, education, and welfare businesses. The giant books are stacked in a shape of a fan, representing Mr. Lin's effort to hand down his idea of running a good school so that all students can respect, think, and learn in meaningful ways.

In addition, there are two sculptures aside, one being a diligent and competent senior high school student with a schoolbag and staring at Mr. Lin, and the other being a tender-aged girl carrying a doll, looking back at Mr. Lin, and talking with him like a granddaughter. The entire set of sculptures appear to have hierarchy and order, showing more of completeness and kindness.